Federal case law reporters and the Federal Practice Digest are still being updated in print; all sets can be found on the 4th floor of the Law Library. See the map below for their location in relation to the stairwell. 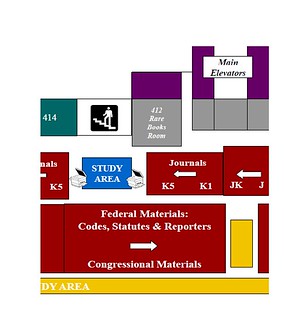 About the National Reporter System

Cases are published in chronological order based on the date they were decided, and not by subject. Unfortunately, however, the research projects you receive usually will be asking you to research a legal issue (i.e., a subject). Therefore, you need an index to the reporter system. This is where the West American Digest System and the Topic and Key Number system come in handy. West publishes unofficial reporters as part of its National Reporter System with the goal of including every reported case from every jurisdiction. For state cases, West publishes seven regional reporters, which each include cases from several states. West publishes a map that shows which states are covered in each regional reporter. Note that these do not always make geographic sense; for instance, Oklahoma and Kansas are listed as "Pacific" states.

About the West Key Number System

Cases are published in chronological order based on the date they were decided and not by subject. However, the research projects you receive usually will be asking you to research a legal issue (i.e., a subject). Therefore, you need an index to the reporter system. The West Key Number System provides an indexing function for all published cases, enabling a researcher to locate cases by subject from any court in any jurisdiction. The system also acts as an abstracting service, providing researchers with short summaries of the points of law discussed in the indexed opinions.

The Key Number System subdivides the law into over 450 broad legal Topics, which are then further subdivided into Key Numbers, which are assigned to specific legal issues within the broader Topics. Topics and Key Numbers are consistent throughout West's System; the same subject arrangement is applied to all cases from every jurisdiction, so that if you find a case from one jurisdiction that discusses a legal issue you are researching, you can use the Topic and Key Number for that issue to find other cases from other jurisdictions that discuss the same issue. The "Searching with Key Numbers" guide (above) provides more detail.

West employs attorneys who read each case, identify the point(s) of law discussed, summarize the point(s) of law in a headnote (a paragraph summary of the point of law) using consistent legal terminology. At least one Topic and Key Number are assigned to each headnote. These headnotes will appear in a West digest under the appropriate Topic and Key Number and at the beginning of each case as it appears in a West reporter.

Cases are opinions written by judges that resolve disputed legal issues (as opposed to disputed factual issues). Researching cases is important because of the doctrine of stare decisis or precedent. Under the principle of stare decisis, courts are bound to follow the rulings of law from previously decided cases in the same jurisdiction when facing similar cases currently before the court. For the legal researcher, reviewing cases from a court will help determine how the court will rule if given a similar factual situation. In the U.S. system, the only published cases you will find are from intermediate appellate courts and supreme courts. Most trial court decisions are not published.

How to Read a Case

At the top of the reporter page (see below), you will see the citation to the case, including any parallel citations (citations to the same case in other reporters). Then you will see a short summary of the case (the syllabus), which includes an indication of how it got to the court that has issued the opinion, and the holding(s) on the point(s) of law. After the syllabus, you will see the headnotes discussing the point(s) of law in the case in the order in which they appear in the opinion, as well as the Topics and Key Numbers that can be used to find other cases on the same legal issue(s). Next is the actual text of the opinion. Citators perform two functions for legal researchers. A citator will tell you if the case you've found is still "good law," or if subsequent decisions have weakened its authority or overruled it altogether. A citator can also provide citations to other cases and secondary sources that discuss the same legal issue as in the case you've found.

If you have access to multiple citators, it's a good idea to check your case in each citator, because citator results will often include different cases, different secondary sources, and different interpretations of subsequent cases that have cited to your case.

Lawyer's Nightmare: DOL Blames Westlaw for Skimpy Brief - this Law360 article demonstrates the hazards of relying on the results of just one research platform/citator.

As part of its LibTour podcast series, CALI created this brief introduction to the West American Digest System. Follow the link below to the podcast.

How to Cite Cases - Examples

Rule B10 (Bluepages) of The Bluebook (21st edition) covers how to cite cases in non-academic legal documents. The Bluebook, however, notes that practitioners should be aware of local court rules and specifies on p. 3,"Make sure to abide by any citation requirements of the court to which you are submitting your documents." Table BT2 of the Bluepages contains an index of jurisdiction-specific citation rules. See the "Illinois Resources" tab of this guide for specific information on citing cases, statutes, and regulations in Illinois court documents.

There are many variables involved in citing cases, so you will probably have to check one of the sub-parts of a rule to determine how to cite your particular case. The following example is the first one included in rule B10 (rule B10.1) (Bluepages) (see p. 11)

The components of the citation are, in order: the name of the case; the published or unpublished source in which the case can be found; a parenthetical indicating the court and year of decision; other parenthetical information, if any; the case's subsequent history, if any. For the case name, omit all parties other than the first party listed on each side of the "v." per rule B10.1.1 (Bluepages). In the above citation, note that the first page of the case is listed, as well as the specific page referred to (pinpoint citation) per rule B10.1.2 (Bluepages). Per rule B10.1.3 (Bluepages), when citing decisions of the U.S. Supreme Court, or a state's highest court, do not include the name of the deciding court, as in the above example.

The Bluebook notes that the Bluepages retain the tradition of underlining certain text, although italics are equivalent (see p. 6).

Rule 10 (Whitepages) (see p. 95) contains the rules for citing cases in academic works. Some examples The Bluebook provides are:

In this example, the case was published in volume 477 of the U.S. Reports (the official reporter of the U.S. Supreme
Court). The case starts on p. 57, but the cited information appears on p. 60. The case was decided in 1986.

In this example, the case was published in volume 727 of the Federal Supplement (a West reporter that contains selected decisions of the U.S. District Courts). The case starts on p. 1407, and the cited information appears on p. 1412. The case was decided by the District Court of Massachusetts in 1990.