The texts of the Restatements with current case citations are available in Westlaw and Lexis.

In Westlaw, all of the Restatements may be searched concurrently in the "Restatements and Principles of the Law" database.  Individual Restatement titles may also be searched by clicking on links for each title (e.g., Contracts, Property, Torts); clicking on an individual title also brings up a Table of Contents view that allows you to read a particular section from that title or to search multiple sections at once.

In Lexis+, you can see a full list of available ALI publications by clicking here. Clicking on any of the individual titles will bring up a Table of Contents; you can also search by keyword across ALI titles or within an individual title.

The Restatements are published by the American Law Institute (ALI). Founded in 1923 and composed of prominent judges, attorneys, and law professors, ALI promulgates the Restatements as well as model statutes and principles of law. Covering a variety of fields, the Restatements essentially "restate" the common law rules as they have developed over time in the majority of U.S. jurisdictions. Along with providing common law doctrines, the Restatements include commentary, hypotheticals illustrating how the rules should apply, and case summaries. The Restatements generally carry substantial weight as persuasive authority and are frequently cited.

The Restatements have been published in four series--with some subjects appearing only in the third series. Between 1923 and 1944, Restatements were developed in the areas of Agency, Conflict of Laws, Contracts, Judgments, Property, Restitution, Security, Torts, and Trusts. In 1952, ALI began a second series of Restatements that updated the first and added new topics such as Foreign Relations Law of the United States and Landlord and Tenant. In 1987, ALI initiated a third series of Restatements, which added such topics as Unfair Competition, the Law Governing Lawyers, and Torts (Liability for Economic Harm). The Foreign Relations Law of the United States is now in its fourth series. Initial versions of Restatements are now titled “Restatement of the Law” without reference to a numbered series. Restatements that are part of an existing series remain in that series. Current projects include the Law of American Indians, Children and the Law, and Copyright. For a current list of all ALI projects, click here.

The Restatements are divided into chapters and subdivided into numbered sections, which generally include:

-a statement of the "black letter law"

The comments explain the provision in detail, and the illustrations demonstrate how the provision would apply in various hypothetical situations. The Reporter's Note describes the historical development of the section with case law references.

Restatement titles contain a general Table of Contents as well as other tables for cases, statutes, and cross-references. Restatement titles also have an individual keyword index, and the more recent titles also have a cross-reference table for West Key Numbers and American Law Report annotations. In addition, Restatement titles include summaries of cases that have cited each section. Case annotations for some topics (most notably, Torts) have been published separately in appendices; all titles are updated with annual pocket parts or supplements that contain case summaries. The annual pocket parts and supplements are further updated semiannually in Interim Case Citations to the Restatements of the Law.

Below are links to examples of various parts of the print Restatement volumes in PDF format from the HeinOnline "American Law Institute Library" database.  Note that these links are accessible only on campus or remotely with a valid Loyola ID and password. 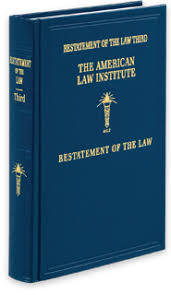 CALI LibTour - Restatements of the Law

As part of its LibTour podcast series, CALI created this brief introduction to the Restatements. Follow the link below to the podcast.

Rule B12 (Bluepages) of The Bluebook (21st edition) prescribes how to cite the Restatements in non-academic legal documents. The following examples are provided in this rule (B12.1.3) (see p. 20):